The Pomegranate Tree at Poplar Grove 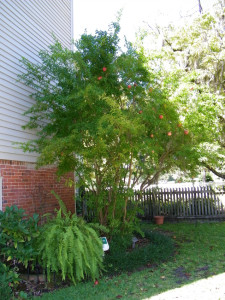 The courtyard of the Manor House has a pomegranate tree located next the original cistern that once collected rain water from the interior French gutters for washing and laundry use. The hardy tree was planted in the early 1970’s by the founder of Poplar Grove Foundation, Inc., Jan Mendall Lewis, when the interior courtyard was turned from a sandy domestic work space into a grassy area bordered by a variety of flowers, shrubs and trees.

The story of the Pomegranate goes something like this, and we enjoy it because of its reference to the Greek Goddess, Demeter, who had a beautiful daughter named Persephone. She was so beautiful that she was kidnapped by Hades, the King of the Underworld.  Since Demeter was the goddess of growth and death of the earth’s vegetation, Demeter went into great mourning and refused to nourish the earth after the kidnapping of her daughter. Man and beast were starving…… 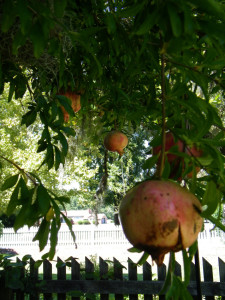 Zeus got tired and weary of the whole ordeal and rescued Persephone….but just before she was rescued…

Persephone was tricked into eating the delicious pomegranate.

It was known in this Greek mythology setting that when one eats of anything while in the underground world…….they must remain there.

Hades agreeing that Persephone had suffered the same as her mother—would only have to stay in the underworld for 2/3 of the year. So for 8 months of year Persephone was with Demeter and the other 4 with Hades. Demeter was not a forgiving person and denied the earth any vegetation for those 4 months that her daughter was away—thus bringing on the season of changes.

According to Greek legend, previous to Persephone’s abduction, the earth flourished 12 months of the year.

This exotic little tree originally only grew in the Mediterranean climates, and most abundant in Iran and India. It can grow to 30 feet tall depending on variety. 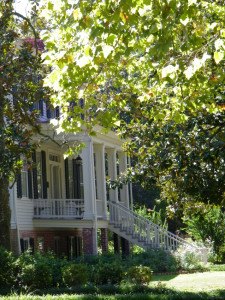 More than 500 varieties of pomegranate exist. It can withstand temperatures to 14 degrees Fahrenheit. From flower to fruit is approximately 7 months. Its medicinal uses are many from treating stomach upsets to curing cancers.

Our little tree flourishes untended and reminds us of the hope and promise of spring!