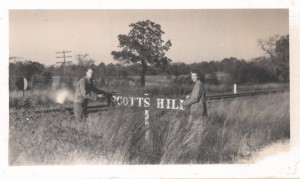 This page is currently being constructed to include full text PDF interviews of various Foy family members as well as an extensive series of photographs of the last generation of Foys to reside at Poplar Grove. Please keep checking this page as new information is added. 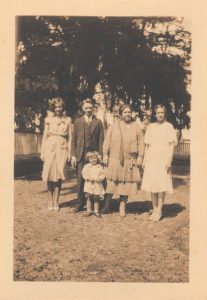 Carbide acetylene gas lamps provided illumination from a carbide plant outside that piped the gas into all of the rooms as well as twelve fireplaces in each of the twelve principle rooms that provided both heat and illumination. Abbey Anger remembers the house being lighted by lamps, and every day had to be filled, the chimneys washed and wicks trimmed.  “In the early 1920s, Dad (Robert Lee Foy, Sr.)  installed the carbide acetylene lights.  The white residue formed by the process was used to whitewash cabins, fences, and so forth for the whole community.  The first electric lights were turned on Christmas Eve 1937.”

“Rooms were seldom heated,” remembers Abbey Anger, “In winter, a wrapped heated brick took the chill off the cold sheets.  Feather beds were a special delight for the cold winter nights.  The rooms were heated by fireplaces or stoves attached to the fireplace.  It kept one person busy supplying wood for heating and cooking.”  Abbey’s sister, Jerry, recalls that “wood had to be carried and stacked on the third floor porch. In the wintertime the house was damp and cold in the rooms with not heat and especially in the halls.  We used warm bricks to heat a space in the bed to heat our feet. There was so much over on top of us that it was hard to turn over.  Some beds had feather mattresses and others cotton-filled mattresses.  It was always warmer in the feather bed.”

Robert Foy, Jr., remembers that only the living rooms and kitchen were heated, “and that was it.  If you were sick, you were put in a room where there was heat.  We had feather beds and quilts.” Read Robert Lee Foy, Jr.’s Full Interview.

The room in front of the dining room was a “sitting room.  It was never used as much as the other rooms. Theresa and Abbey took piano, and there was a piano in there.  We always had square dances on Saturday nights,” remembers Robert Foy, Jr., “We had a big double room, so most of the time the dances would be at our house. The dances were were on the main floor in the double parlors.  There wasn’t much furniture in the house so it could be pushed to the side.  My daddy put hardwood floors down, oak floors, and they would put corn meal on the floor to make it slick.  Square dances at that time were precision dance. We had live music, a fiddle, banjo, bass fiddle, guitar, violin.  There were about four or five men that played.  Everyone lived within a 10 to 12 mile radius.  That was one of the big entertainments on the weekends.  They did not play past midnight on Saturday night.  So it was told that women would set the clock back so the dance could go on.” 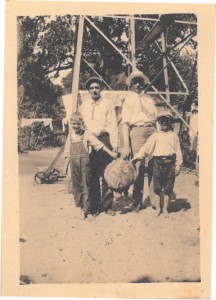 According to Abbey Anger, “the 1920s and 1930s were depressed years on the plantation.  Therefore, there was little formal entertainment, except for weddings, visiting families and family reunions.  Later, in our high school and college years, Dad was to chaperon many house parties in this house. Ice was a luxury.  It arrived by train and baggage car, packed in sawdust.  The 300 lb. cake was transported by horse and wagon to the house, and, by special pulleys and tongs, the ice was hoisted to the main floor back porch into position by block and tackle that went across the top of the porch to the icebox which had been made to hold this block.  The milk safe was near this box at the kitchen door.  It is one of the original pieces of furniture left in the house.

We always had plenty of fresh milk, cream and farmer’s cheese.  Beef, dairy cattle and hogs were kept on the place for home consumption. Chicken and ducks supplied meat and eggs.  There were guinea hens and sometimes turkey.  Dad hunted so we had wild game, quail, ducks, dove, marsh hen, wild turkey, squirrels, venison.  There was plenty of seafood such as shrimp, oysters, and all kinds of fish, blue and rock crabs.”