The staff at Poplar Grove is dedicated to helping students understand the uniqueness of life along the Gullah Geechee Cultural Heritage Corridor through several generations of a single family, including the highs and lows of southern culture and industry, and the operations and purposes of plantation life from enslavement to tenant farming.

Educational programs are designed to meet Competency Goals for the Common Core State & NC Essential Standards. Schools can choose from three programs that bring history to life for students of all ages.

For the safety of the faculty, staff, parents and students, school-sponsored activities are required to register by emailing Emily McInerney at emily@poplargrove.org or call 910-398-5673. Programming for school tours are on Mondays and Tuesdays during the spring, summer and fall.

THINGS YOU MAY SEE & DO, DEPENDING ON THE TOUR OPTION YOU CHOOSE:

Orientation
Orientation begins in the Gift Shop at the lower level of the Manor House.  Follow the brick walkway to the back of the Manor House. This overview will start the visit with a map and schedule of your class activities.
Manor House
Built by Joseph Mumford Foy, circa 1850, after the original manor house was destroyed by fire in 1849. The Manor House brings to life the history of the Foy family through period furnishings and the architectural, carpentry, masonry and artisan skills of the enslaved.
Smoke House
Circa 1850. Used for smoking meat, a form of food preservation during a time when there was no refrigeration.
Kitchen Storage House & Herb Cellar
Circa 1850. The cooking was done in a separate building, away from the Manor House, due to the threat of fire. The original kitchen had three working fireplaces with a single chimney and included a separate brick Kitchen Storage House & Herb Cellar building. The original wood framed kitchen later became known as Cook’s house in the early 20th Century, and was later demolished. The original Kitchen Storage House and Herb Cellar still exists. The underground level of the storage house was used to dry and store herbs used in cooking.
Tenant House
Circa 1900. Tenant farming became an economic necessity after the Civil War and the emancipation of formerly enslaved.  At Poplar Grove, 2/3 of the formerly enslaved remained on site, and a few family descendants remained on site as tenant farmers and domestic servants through WWI and WWII. Until the 1960s, this two-room tenant house was last occupied by Nimrod Nixon, descended through several generations of Gullah.
Gardens (in season)
Display gardens on site include herbs, vegetables and flowers, dye plants, peanuts, tobacco and cotton at various times of the year.
Peanut & Agricultural Exhibit Building
Housing a collection of antique farming tools, equipment used around the early 1900’s for peanut production and harvesting, plus exhibits on peanut production.
Basket Studio
A large variety of baskets, materials and techniques are used here to interpret the skill and history of basket-making.
Blacksmith Shop
The blacksmith shop produces nails, hardware and tools. Repairs to farm equipment, wagons and the shoeing horses were also done here.
Weaving Studio
The weaving studio depicts traditional skills necessary to make yarn and fabric for clothing, linens, rugs and other textiles.
The Stables 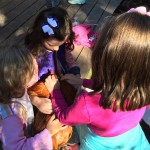 Visit with our varying menagerie of goats, sheep, ponies, geese, chickens and more.

A ride on the wagon through the Abbey Nature Preserve and through areas of the original estate.

Available on a first-come, first-serve basis. School groups are welcome to use the picnic tables for lunch and the playground for break-time. Restrooms on sit as well as bus parking.