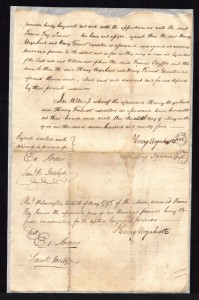 Early New Hanover County Records lists 170 acres of Poplar Grove in possession of James Moore and Ann, his wife, who sell the 170 acres (E 370-1767) to Cornelius Harnett, one point of which touched the Sound near Perry’s oyster shell landing and another touched on Rich Inlet Creek at a point a little above the fork of the creek and then followed the eastern fork far inland; an additional 40 acres sold to Caleb Mason, next to the 170 acres, both having an interesting border point which they called the “Brickyard;” finally another 628 acres sold by “Henry Urquhart & Henry Toomer to James Foy, Jr. (land sold by Mary Harnett Widow & Exec. of Cornelius Harnett to Francis Clayton, 3 February 1784, and by him by will 2 October 1790 devised to be sold).

The property of which is so named and referenced as Poplar Grove in both the land deed of sale and also in a letter by Cornelius Harnett after his last journey from Philadelphia to North Carolina in January 1780: “From his quiet home at ‘Poplar Grove near Wilmington,’ on Washington’s birthday, he wrote to Burke then at Philadelphia, ‘After one of the most fatiguing and most disagreeable journeys that ever an old fellow took, I at last arrived at my little hovel and had the happiness to find my family in good health.’”

James Madison Foy, Jr., purchased 628 acres in 1795 from Francis Clayton – the expanse of land, the mansion house and and the banks lying to the southward and in the sight of the Mansion House (L 133-1795).”  The expanse included what became known as Foy Island or Woods Beach, now most well-known as Figure Eight Island.

Elizabeth McKoy further notes that “various windings of the said Creek (Rich Inlet & Perry’s) to a grist mill some time ago erected by Cornelius Harnett and taking in one acre of land on the opposite side of the Creek purchased by the said Harnett from the estate of Benjamin Gurly for the purpose of the Mill” (110-111).

Indeed, Poplar Grove was the second home of Mary and Cornelius Harnett who lived principally 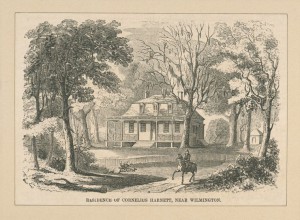 at Maynard built circa 1752 near where Smith Creek emptied into the Cape Fear River (later known as Hilton when sold to John Hill on May 31, 1784) on the east bank of the Cape Fear just north of Wilmington, and commanding a fine view of the river as well as the second plantation, Poplar Grove, on Topsail Sound. Unfortunately, Mary Harnett died in New York City in April or May of 1792. The couple had no children. 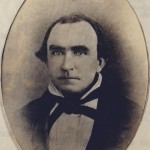 After James Foy, Jr.’s death at his seat on New Topsail Sound in March 10, 1823, the acreage and home remained in the care of his wife, Henrietta. The Slave Deeds of New Hanover County lists his wife as receiving ownership of the following enslaved persons: Hannah, Jacob, Joseph, and recognizes the marriage of the enslaved, Tom and Sarah, who have a son and daughter also named, Tom and Sarah, of which Sarah remains with her mother and father in Henrietta’s household; however, their son, Tom, is bequeathed to James Foy, Jr.’s first son, Henry Rhodes Foy, who also receives Dick, and Dick’s children with his wife, Nancy, named Jim, Anthony, Lusy and Morris; their mother, Nancy, is bequeathed to Joseph Mumford Foy, to remain in the household, more than likely to tend and care for Joseph Mumford who is just shy of his 5th birthday when his father dies.

Though the circumstances are unknown, James Foy, Jr. instructed his executor, Henry B. Howard, that Marion, Poldore, Robin and Zephy “be sold on a credit of twelve months, drawing interest after 6 months.”

The 5th child of James Foy, Jr., Joseph Mumford Foy, marries Mary Ann Simmons (b. May 2, 1822 in Onslow County) on a Tuesday evening of November 19, 1839.  He is 22 years old, and she only 17.  As a new bride and groom, Joseph Mumford and Mary Ann brought into the marriage the enslaved persons bequeathed to them as well as those enslaved persons given as gifts from their respective households in which to start their own.

The following spring, April 7, 1840, Joseph Mumford Foy’s mother, Henrietta Rhodes Foy, dies and bequeaths four of the twelve enslaved persons in her possession to only one son (Joseph Mumford), who are John, Nelly, Tom and Winslow.

The remaining eight enslaved persons are bequeathed to Henrietta’s grandchildren as follows: James F. Foy and J. H. Foy (boy) receive equal interest in Cate (woman) and Jonah (boy), whose relationship is not indicated except by gender; William L. Foy receives Izaah and Ruth, noted only as a boy and girl; Francis S. McAllister, Eliza G. Shepard, and Henrietta R. Shepard receive 1/3 interest each in Hannah and Jacob, who are listed as mother and child; and lastly, Henrietta R. Foy (granddaughter) receives an enslaved female named Tena (Slave Deeds of New Hanover County).

Thus, the 1840 Federal Population Census lists Joseph Mumford Foy (newly married and 22 years of age) as owning a total of 22 enslaved persons, 11 males and 11 females, nine of which are under the age of 10. However, it is not yet clear if the previously mentioned enslaved, John, Nelly, Tom and Winslow from his mother’s estate, are included in the 1840 census.

Of the 22 enslaved persons under the ownership of the young couple, 12 are listed as employed in agriculture and would have continued their assignments in maintaining the house and fields. The original plantation home, located closer to Rich’s Inlet, burned prior to the construction of the manor house between the years 1850-53. Thus, with the enlistment of their skilled artisan enslaved as well as perhaps the rental of neighboring enslaved persons skilled in construction, Joseph Mumford Foy selects to build his new home closer to the new Wilmington and Topsail Sound Plank Road (today US Hwy 17). 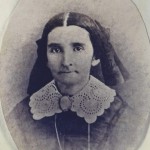 The children of Joseph Mumford and Mary Ann Simmons Foy include:

Poplar Grove, like most all plantations up and down the coastline of the Gullah Geechee Cultural Heritage Corridor, was a self-sustaining plantation. At its height in 1860, Poplar Grove was one of the earliest peanut producing farms in the state of North Carolina, along with the neighboring plantation of Nicholas N. Nixon (b. 07/24/1800 & d. 10/29/1868), who acquired an additional 650 acres of Porters Neck plantation in 1839 and another 500 acres of the same in 1851 and 1854 (Johnson 65).  Joseph M. Foy’s neighbor and colleague, Nicholas Nixon, owns the skilled plasterer, William Gould, along with over 100 enslaved persons in Rocky Point, due west, growing peanuts all across the northern half of New Hanover County. 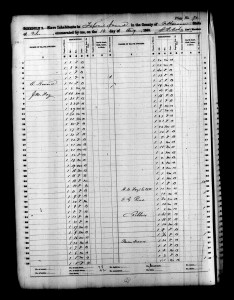 In the the August 30, 1860 issue of “The Country Gentleman,” Joseph Mumford Foy opines that “the principle crop raised in this vicinity is the pea nut, or ground peas as they are generally called. In my section of the country there are over one hundred thousand bushels raised. We consider them more profitable than cotton, where land is suitable for their culture. They have been a great source of wealth to this section of the country. Good land will produce fifty to seventy-five bushels to the acre” (Johnson 61). However, duly noted, Nixon adds that “the picking and preparing for market is a tedious and troublesome process, as the best hands (enslaved) will not clean more than two to four bushels per day and those who are inexperienced, not more than half of that” (Johnson 71).

The successful operations of Poplar Grove were based upon an increase in the number of enslaved from the onset of Joseph Mumford Foy’s marriage. He purchases and/or amasses another twenty-seven additional enslaved persons, either born into bondage on site or purchased during the 1850s. The 1860 Federal Slave Schedule of the County of New Hanover, State of North Carolina, August 14, 1860, includes a total of 59 enslaved persons on the Foy estate, living in 16 slave houses and listed in the following order: 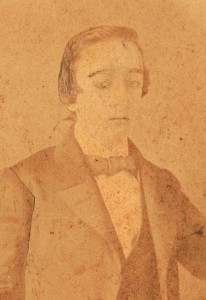 Joseph Mumford Foy intended that his eldest son, David Hiram Foy, be the next to manage the family’s estate. As political storm clouds were looming, Joseph wrote to his son in 1861 that: “should Lincoln be elected which I fear will be the case will the South secede and how shall it be prevented. My motto is Union forever.” The Foys were Southern Unionists and representative of the complicated and complex legacy of slave ownership among North Carolinians, and coastal North Carolinians in particular. (Refer to the Gullah Geechee Corridor page for more information).

In the meantime, Joseph’s health was failing, and he died on April 1, 1861 — the American Civil War beginning only two weeks later. He was only 44 years old. His children, including David Hiram, Henrietta Rhodes, Joseph Thompson (born November 16, 1846), James Williams, Henry Simmons, and youngest son, Francis Marion, barely six years old, remained under the care of their mother, Mary Ann, but not without sizable assets that required accounting, assessment and direction.

That Joseph Mumford Foy left his assets to his wife, and not to his oldest son, who was still away at Chapel Hill upon his passing, indicates one of two things: 1) his Last Will and Testament was composed while David was still too young to manage such a large estate; or 2) he felt more than confident that his wife, Mary Ann, could manage the estate until their oldest son came of age. In either case, his esteem and admiration for his wife illustrates both his heart and his mind, and she moves quickly to maintain order and supervise operations while adhering to her loyalty to God and country – not the newly seceded Confederate States, but the United States of America.

Mary Ann Foy’s navigation of politics, economics, banking, legal affairs, household duties, property management, crop production, as well as the care and responsibility of her young children and even more importantly the care and responsibility of the many enslaved families whose labor she depended upon to survive is its own epic saga, but no less so than the enslaved families whose very freedom was so close at hand.