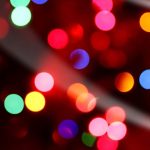 In preparation for ALL IS BRIGHT, A Holiday of Lights, presented by Patriot Illumination, daily tours are closed for the season.  The tour schedule will resume in February 2023 for Black History Month.

Daily tours of the Manor House provide a unique opportunity to better understand the structure of enslavement on coastal plantations with the Gullah Geechee Cultural Heritage Corridor. The Manor House at Poplar Grove was built by skilled enslaved persons descended from Foy family members and their marriages to neighboring planters, many of whom were prominent eastern North Carolina pre-Revolutionary War families who had settled in the Albemarle Sound region and along the northeast and northwest branches of the Cape Fear River. These families were active participants in the Revolutionary War, including figures such as General James Moore, Cornelius Harnett Jr., Francis Clayton, Colonel Henry Rhodes Jr., and Captain James Foy, Sr.

Poplar Grove was first deeded to General James Moore and his wife Ann, who sold it to Cornelius Harnett Jr. in 1767. Harnett was the first to refer to the property as Poplar Grove, and he conducted much of his Continental Congress business here. Upon his death in 1781, Harnett’s Poplar Grove was purchased by Francis Clayton, who had served as Deputy Chairman to Harnett’s Chairmanship of The Wilmington-New Hanover Safety Committee. Francis Clayton will return to England, and in 1795, the property was sold to Captain James Foy Sr.’s first born son, James Foy Jr., who had married Henrietta Rhodes, the daughter of Colonel Henry Rhodes, Jr. The property will remain in the Foy family until 1971.

The wealth of the Foy family was built upon the skills of pre-Revolutionary West African fathers and mothers, who apprenticed their sons and daughters to practice a trade that would be most valued by colonial planters. At Poplar Grove, the cultivation was first of indigo and maize, then of peanuts and sweet potatoes primarily. Such apprenticing was an attempt to ensure the close network of their family ties and the care in which they may or may not receive from the plantation’s enslaver, or overseer or both. The enslaved sons and daughters, mothers and fathers, in the Foy family household were typically gifted in last wills and testaments and as a form of dowry upon the marriages of planter sons and daughters.

If the enslaved families of the Foys were uprooted and divided because of the death of their enslaver, their lives could change dramatically.  Last wills and testament illustrate how enslaved families were split up among between Foy family descendants from Albemarle Sound region to Wilmington along the coastline or to the tobacco fields of the Piedmont region, and subsequently into other parts unknown. Onslow County records indicate that an enslaved male of one Foy family escaped to find his young family which had been deeded to another Foy descendant in a neighboring county. The conditions of the enslaved varied from one family member to the next. For example, one Foy enslaver of New Bern was notoriously cruel towards  his enslaved while another brother, Enoch Foy, left his white family to marry one of his enslaved females in spite of the social, political and legal fall-out among his family and white community members.

Joseph Mumford Foy, grandson of Captain James Foy, Sr.,  profited from this family’s human assets, having built his new home on a plantation compound that was purchased by his grandfather, Captain James Foy, Jr., from the estate of Cornelius Harnett whose enslaved people originally produced indigo on the site, like so many colonial planters between here and Charleston. The valuable skills of Joseph Mumford Foy’s enslaved males included well-developed trades in blacksmithing, masonry, woodworking, milling, and plasterwork as fine as the Plaster of Paris ceiling medallions of the front and back parlors and hallway to the interior skim work of the manor house walls to the exterior use of tabby over the brick work of the smokehouse.

Upon completion, Joseph Mumford Foy took out an insurance policy on his newly constructed house and kitchen on April 25, 1853.  The description of which reads as follows:

This well-constructed home, strategically located for railroad and water shipments of peanuts and sweet potatoes, and later blueberries and watermelons, was constructed not only by Joseph Mumford Foy’s enslaved males, but also the enslaved provided to set up his household through the marriage of his wife, Mary Ann Simmons Foy. Agriculturally, the skills of successfully growing sweet potatoes and peanuts in the sandy soil of the coastal Carolinas mirrored the farming techniques of West African practices introduced by the Portuguese in the 1600s from peanut varieties in South America.

Notably, two varieties of groundnuts originated in Africa: the Bambara groundnut, or Vigna subterranea, and Kersting’s groundnut, or Macrotyloma geocarpum, formerly Kerstingiella geocarpa. Both varieties were cultivated before the arrival of South American varieties from the Portuguese. Linguistically, the Bijago word for Bambara groundnut, mancarra, became the adopted word for peanut in the Portuguese territories (Cherfas from Peanuts and World History). Thus, the cultivation of peanuts by Africans were practiced long before the transatlantic slave trade. Though tt is assumed that the Portuguese introduced peanuts to the African continent from Brazil, it was a crop already familiar across coastal African kingdoms, long before the arrival of the Portuguese.

Since 1853, the house and grounds of Poplar Grove have undergone periods of peak production and eventual decline, only to be resurrected again and again because of its historical value to the local community of Scotts Hill, North Carolina, and its representation of southern coastal life in the Lower Cape Fear Region and as an echo of the Gullah Geechee traditions of the formerly enslaved people along this southeastern part of Pender County. Several intact Black communities along US Highway 17 have ties to the land as far back as the 1720s and are now recognized as part of the distinctive Gullah Geechee peoples and part of the Department of Interior’s Gullah Geechee Cultural Heritage Corridor.

The property, including manor house, outbuildings and 13+ acres, was purchased from the Foy family in 1971. During the 1970s, the house and surviving outbuildings, including kitchen shed and smokehouse, underwent extensive renovations. 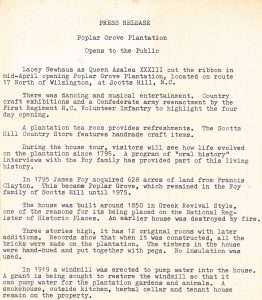 In 1980, the house and grounds were opened to the public for guided tours, including a tea room for light lunches in the brick basement, and a Country Store and gift shop in a former three car garage adjacent to the north side of the manor house.

After three decades of public viewing, the manor house had suffered considerably, both from daily wear and tear, and from several hurricanes  in the 1990s that crippled the “double piazzas” that overlooked the layout of what was once a thriving farm, supporting more than seven tenant farming families – the descendants of the Foy enslaved who remained on the plantation after Emancipation as tenant farmers and domestic servants.

Since January 2013, the Manor House  has gone through several stages of restoration, renovation and preservation.  Most notably was a new roof, which after years of minor repairs, had caused serious leaks along all four exterior and interior walls.  The interior French gutter system was also repaired where possible, replaced as necessary, then fully lined, and finally restored at a considerable expense.

Work was completed on the north side principle rooms of the Manor House in 2013, including plaster repairs and paint matched to an original color of pale yellow in the adjacent kitchen.

Two fire places were stripped in the dining room and front morning room.  Once stripped, the fireplaces revealed several varieties of wood, including pine, poplar, and oak, evidence of several previous additions.  Consensus was to apply a walnut stain to the fireplaces to complement the major architectural element in the main hallway, the original walnut staircase.

In the summer of 2013, the “double piazzas” on the back of the Manor House were completely replaced, including new beams, flooring, posts, and columns as well as a new back staircase, which also had to be replaced.

If you have driven by Scotts Hill in the last year, then certainly you will have noticed the exterior of the Manor House is now its original white.  The shutters are in serious disrepair and to replace will come at quite a large expense.  We have plans to start a shutter campaign!

In the winter of 2014, renovations continued on the interior of the Manor House. The two parlors on the main floor were emptied of furniture, carpets, family heirlooms, paintings and Victorian prints, so that plaster repair, trim work, and painting could begin.

The Sherwin Williams paint colors for the front and back parlors were selected based upon an earlier sample of red faux marble trim dating from the late Victorian period, which was a very popular technique at the time,though quickly became out of fashion just as wallpaper featuring Greek columns also went out of fashion.

Since red marble has a wide color spectrum representing a variety of corals, reds, oranges and purples, Silk Brocade in the front parlor references not only the historic colors of Charleston but also southern coastal cities stretching along the Gullah Geechee Corridor and the port city of New Orleans. To complement the stronger Silk Brocade color, Youthful Coral was chosen for the back parlor.  This color is also referenced in the stitching of the original Foy family parlor set.

Like the north side rooms, the hardwood floors in the four south side principle rooms were refinished from 40 years of public tours.

Because the main central hallway and winter bedroom had been transformed to mimic a northern brownstone walk-up for an Oprah Winfrey production, The Wedding, in the 1990s, the dark and flowery late Victorian wallpaper was removed and a color for the walls was chosen from a Foy family bedspread from 1857.

The siding on the north side wing  required complete replacement as well as two windows that face the back of the property. Dependent upon funding, donations and public support, we have plans to finish gutting the basement and basement rooms on both wings.  One side of the basement wing was once a respite for Robert Lee Foy, Sr.’s prized chickens, and the other designed as sleeping quarters for the Whitings’ chauffeur, a wealthy rug manufacturer from New York, who rented the lower level of the home during the 1930s during the hunting season, shipping their many hunting dogs as well as their car! by rail. Plans in 2022 are to restore the lower level into its original function as a domestic space of the formerly enslaved, and later as an apartment for northern gentry to lease during the Great Depression to offset the expenses of maintaining the property.

Poplar Grove is not supported by county, state or federal funding, but through donations and revenue generated by tours, fund-raising events, and facility rentals.  As a non-profit organization, all income supports the operational costs of maintaining 13+ acres, artist studios, original outbuildings, the manor house as well as animal and school programs.

Such positive changes are taking place so that future generations can continue to experience the history of the many families, who fought to embody the American dream through all the political and social turmoil of a democracy wrestling with its brutal and uncompromising history of slavery.  From Civil War to Civil Rights, the Foy family household, both white and black, had to continually negotiate the sea tides of change in southeastern North Carolina, creating a community of descendants whose story of survival and redemption continues to unfold.

Come see what is on the other side of the northern New Hanover County line.