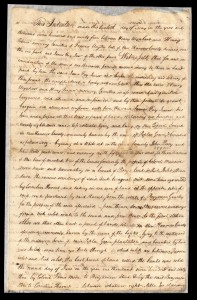 The manor house is listed on the National Register for Historic Places. It is built primarily in the Greek Revival style, an architectural reference to the ancient Greeks and the founding principles of democracy. The house also has echoes of the Federalist period in architecture in its rectangular structure and window arrangement. The plans were mail-ordered from popular magazines of the 1840s and 50s, and fully constructed by Joseph Mumford Foy’s enslaved males, who themselves were often rented out among and between other planter families, including the Nixons, Meares, DeRossetts, Toomers, Bellamys, etc. to construct homes, churches and hotels from downtown Wilmington to Goldsboro, North Carolina.

On June 23, 1795, James Foy, Jr., purchased 678 acres “Commonly known by the name Poplar Grove and bounded as follows – beginning at a white oak on the sound (New Topsail Sound), formerly John Perry and John Matt’s joint corner, and running north 55 degrees west to the eastward (sic) of the line of marked trees of the lands formerly the property of Colonel Maurice Moore Senior and terminating in a branch of Perry’s Creek or Rich’s Inlet, thence down the various windings of said creek to a grist mill sometime ago erected by Cornelius Harnett, and taking in one acre of land on the opposite side of said creek purchased by said Harnett from the estate of Benjamin Gowley for the purpose of the mill aforesaid – from thence down the various windings of said Rich Inlet creek to the sound and from thence to the (sic) station. Also all that other tract or parcel of land situated in New Hanover County aforesaid, commonly known by the name of the banks, lying to the southward of the mansion house of said Poplar Grove plantation and bounded by two new inlets some time ago broke through – which inlets are between Barren Inlet and Rich’s Inlet, this last parcel of land called the banks was sold the second day of June in the year one thousand seven hundred and sixty three by Colonel James Moore to Benjamin Stone and by the said Benjamin Stone to Cornelius Harnett” (Poplar Grove Land Deed). 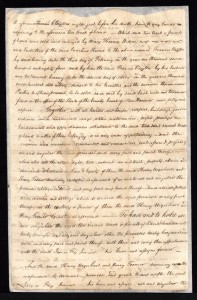 Upon losing the original homestead to fire in the late 1840s, Joseph Mumford Foy chose to build his new home closer to the new Wilmington and Topsail Sound Plank Road. He “personally selected the trees from which the timber and lumber were made and superintended every detail of the construction.  It is a large and beautiful mansion of the old type, built in generous proportions, and its setting amidst a beautiful grove of surrounding trees is remarkably impressive.  It is one of the oldest plantations of continuous residence of one family in this part of the state” (History of North Carolina, Volume V, 1919). If that was true in 1919, it was certainly no less true in 1971, when the property was finally sold out of the Foy family.

Set upon a fully raised brick basement, the masonry of which was kilned by the skills of enslaved men and typically their sons, who acted in the role of apprentice. The house is a 4,284 square foot, two-story frame structure, sided with plain weatherboards. There is a a low, hipped roof  with two pairs of corbelled interior chimneys. Each corner is supported by fluted posts with plain caps and bases.

Supported by simplified square Doric pillars, the front porch dominates the front facade, which shelters three bays on the basement level and rests on rectangular brick piers.  The raised basement and design of the porches reflect a style poplar for the period, but more importantly to help cope with the humid climate of the coastal south. The central door below the porch leads to the basement hall. 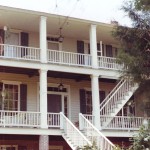 Back of Manor House Circa 1976

In the rear is a sub-porch to the basement, located below a two-tiered porch, or double piazza, running the entire back facade.  Exterior stairs from the ground to the first level are similar to those in the front of the house, and includes a steep staircase from the main back porch to the top-level porch.  This staircase was most frequented by enslaved domestics.  The porches are slanted, which enables rainwater to run-off after flash floods and hurricanes. The only building materials purchased by Joseph M. Foy were tin for the roof and glass for windows; all other materials were taken from site and constructed by the Foy’s artisan enslaved population, whose carpentry, blacksmithing, plastering and masonry skills were highly valued.

Interior French gutters and downspouts, concealed in columns, collected rain water and drained into the cistern on the north of the house. This water was only used for bathing and laundry. “In 1919, Robert Lee Foy, Sr. erected the windmill, building a tank, and putting the tower together on the ground,” according to the memories of Abbey Anger. ” It was hoisted into position by connecting a block and tackle to a large maple tree next to the potato house.  After this, we had our first indoor plumbing.”

Like the exterior, the interior of the house is uniformly and symmetrically finished.  The central entrance bay includes a large four-panel door, with a six-pane transom and sidelights. The basic design is of a central passage double pile type. As such, the floor plan is two rooms wide and two rooms deep, with four symmetrically placed chimneys.

The main staircase features an octagonal paneled newel post, rails and spindles of black walnut, common to the homes in historic downtown Wilmington of the same period. The floors throughout the manor house were longleaf heart pine. Eventually three of the four rooms on the main floor were covered with oak around 1920, as was the fashion of the day. Fortunately, the dining room floor and more specifically the top floor hallway and all four upstairs bedrooms as well as basement floors are the original heart pine, revealing an incredible amber color and tone. 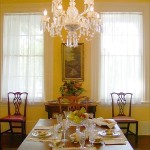 Large plaster cornices are found in the central hallway and parlors on the main floor. Three ornate plaster of Paris medallions adorn the ceilings of the central hallway and front and back parlors. The Bellamy Mansion in downtown Wilmington was built ten years after Poplar Grove, and features the exact same plaster of Paris medallion in one of the four principle main floor rooms.

Notably, artisan slave, William B. Gould, scripted his name in the ornate plaster work in the Bellamy Mansion. Gould was owned by Nicholas Nixon, who had a large peanut plantation neighboring Poplar Grove to the south, and likely apprenticed with one of the Nixon or Foy male slaves to hone his craft, though it is presumed he lived in downtown Wilmington, nearer Nicholas Nixon’s main home; however, the plaster of Paris medallions in the main parlors here at Poplar Grove, constructed when Gould would have been in his early teens, belies this theory. Remarkably, Gould later escaped the bonds of slavery soon after the construction of the Bellamy Mansion and joined the Union naval forces to much acclaim before settling in Nantucket, Massachusetts, after the Civil War.

The windows throughout the house are six over six, varying in sizes of panes. Ceiling heights in the house vary from 8 feet in the basement, 12 feet on the main floor, and 10 feet on the top floor.

Most of the contents of this page are due in part to Gary Eyster, Consulting Director of Poplar Grove Plantation 1979-80, through interviews with the adult children of Robert Lee Foy, Sr.