For more than five generations, Poplar Grove Plantation was owned and operated by the Foy family, descended from French Hugenots and settling in the Americas around 1670. According to Onlsow County Heritage – North Carolina (Copyright 1983), Francis Foy, a native of Normandy, France, was the direct ancestor of all the Onslow County Foys.

Francis Foy traveled from France to England to escape persecution, and married Serena Miles in Yorkshire, England, where he indentured himself to gain passage to America, settling in Baltimore County, Maryland, about 1673.  Their known children were: Mary Foy, Peter Foy, Miles Foy, Joshua Foy, and Thomas Foy, Sr.

The children of Thomas Foy, Sr. and Rebecca Puttee (died 1785, Jones County) include:

(2) Thomas Foy, born January 18, 1726/29 in Baltimore County, MD; died 1789/91 in Jones County, NC. Note: there is some mix up between John and Thomas birth and death dates and county of death that requires further investigation – twins perhaps?

A prominent planter and influential man in Onlsow County affairs, James Foy, Sr.,  served in the Revolutionary War, first as a Lieutenant and then Captain of the Wilmington Brigade in the NC Line, along with other prominent Onslow County Revolutionaries. From the Commonwealth of Onslow – A History: “The officers of the Onslow Militia that year (1775) were William Cray, Colonel; Henry Rhodes, Lieutenant Colonel; Thomas Johnston and James Howard, Majors.

Colonel Rhodes was to collect and pay for all firearms in the county. In 1776 a company of militia was raised in Onslow with officers as follows: Ephrain Battle, Captain; James Foy, Lieutenant, and William Shaw, Ensign” (Brown).

Notably, the contributions of the Onslow County militia was honored by a visit of General George Washington on his Southern Tour in the spring of 1791. From the Commonwealth of Onslow – A History: “Through Virginia into North Carolina in his chariot of State, drawn by four horses, Washington came, passing through Halifax, Tarboro and New Bern. 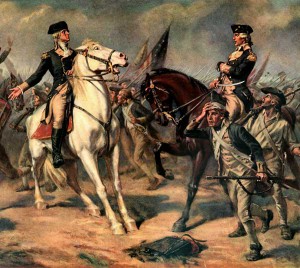 The Presidential Party reached Onslow April 22, 1791, entering the county from Shines (Old Comfort) through what is now Richlands (but then not even a house) on to Chapel Run, where he found a store, a chapel and an ordinary (inn)” (Brown).

In Excerpts from Colonists of Carolina Washington “spent the night at Shine’s Inn, the guest of Captain Daniel Shine and Barbara Franck Shine; took breakfast at Averitte’s, near Rich-lands; dinner (lunch) at Captain James Foy’s on Hick’s Run; and spent the night at Sage’s Ordinary on the southern line of the county.”

After reaching Wilmington on Sunday, April 24, 1791, Washington wrote down his observation of the landscape: “The whole road from New Berne to Wilmington (except in a few places of small extent) passes through the most barren country I ever beheld; especially in parts nearest the latter which is no other than a bed of white sand. In places however before we come to these, if the idea of poverty could be separated from the sand, the appearance of it are agreeable, resembling a lawn well covered with evergreens, and a good verdure below from a broom of course grass which having sprung since the burning of the woods had a neat and handsome look, especially as there are parts entirely open, and others with ponds of water which contributed not a little to the beauty of the scene” (Brown). 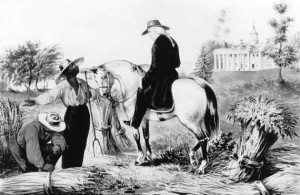 George Washington Among His Slaves

Absent from the local pages of most early colonial history is the mention of slavery. George Washington was bequeathed his first enslaved persons at the age of 11. By the time of his death, Washington’s estate in Virginia was comprised of 318 enslaved men, women and children.

The Foys of Onlsow and Craven Counties were the owners of a significant number of enslaved persons. Records indicate that in 1789, Thomas Foy, Sr., bequeaths a number of his enslaved to brother, James Foy, Sr:

The names of several of these enslaved resurface in the will of James Foy, Sr., below.

From 1793-1795, James Foy, Sr. was the mail contractor from New Bern to Wilmington, a distance of 100 miles, from which he got $500 per year – a Foy postal tradition that continued for several generations.

(9) Thomas Foy, born in Onslow County; died at his plantation in Jones County of a severe fit of cholic March 1800; married in Onslow County September 1796 to Margaret Dudley.

In 1817, James Foy, Sr., owns a sizable number of enslaved men, women and children and bequeaths them accordingly in his will, as follows:

“In the name of God, Amen. I James Foy, Senior, of the County of Onslow and State of North Carolina; being of sound, perfect and disposing mind and memory, blessed be God for the same; Do this fifteenth day of September, in the year of our Lord Christ, One thousand eight hundred and seventeen, make and publish this my last will and desire is that all my just debts be paid as also my funeral expenses; and, as touching my worldly estate, wherewith it hath pleased God to bless my endeavors with, I will and bequeath in manner and form following, viz:

Imprimis: I give and bequeath unto my dearly beloved wife Elizabeth Foy my best bed and furniture, also the saddle and Bridle, one Bay mare and colt, two calves, two sows and pigs, one grubbing ditto, one round table, six Windsor chairs, all the crockery ware, all the pewter, iron tea kettle, two iron pots, all the copper ware, that are in the house at the time of my decease.

Item: I lend to my wife for her sole use and benefit, during her natural life, the house and plantation where I usually reside at, as also fire wood and wood for use of the said plantation. And also, I lend unto my said wife, two negroes named Todge and Eve his wife during the life of my said wife Elizabeth; and at her decease, I will and bequeath unto my daughter Betsey Nixon, the aforesaid negroes Todge and Eve, to her and her heirs (lawfully begotten of her body) forever. Two negroes also pay debts.

Item: I give and bequeath unto my grandson Joseph Mumford, as his mother had all the land and negroes that came to my first marriage, and was delivered to Lewis Mumford for my daughters use, which I considered in full of my first wife’s child portion, to him and heirs forever.

Item: Whereas I have made a deed of gift unto Thomas Foy, son of Thomas Foy, deceased, bearing date 2nd June 1800, for the following negroes, viz: Sall and all her children &c. and I do hereby this my last will and testament confirm the above deed of gift and also one Dollar in full.

Item: I give and bequeath to my oldest son James Foy, Junior, three Hundred Pounds, and Yellow Joe. And I have given him a deed of gift for six negroes and other property, such as horses, beds, hogs, tools, &c. which have been all delivered to him at his marriage, and since, to him and his heirs forever.

Item: I give and bequeath to my son Enoch Foy one negro by name of Ruth, one by name of Sarah dittoMoll and her two children, their names are Ceasar and Frank as also a negro boy by the name of Joe, with the horses, cattle, hogs, beds and tools, put in his possession at his marriage, and all he got for the leased land on the west side of Shillings branch, Mill Creek in Jones County, I give to him & his heirs forever.

Item: I give and bequeath to my son Lewis Foy the seven hundred Dollars he got of my son Enoch for the lease on the east side of Shillings Branch, and a negro by the name of Peter, beds, furniture, Horses, cattle, hogs, tools and smith tools, to him and his heirs forever. Also I lend to my son Lewis Foy the following negroes for his support, as he is a cripple, viz: Dick & Ann, & Hannah & Ned and negro Fan for and during his natural life for his sole support, and at his death I give the said negroes I lend to son Lewis, to his heirs lawfully begotten of his body forever.

Item: I give and bequeath to my daughter Sereney all the household goods and beds she had in her possession when she married Golden, also I lend for and during my daughter’s, Sereney’s natural life, the following negroes by name Peter and Tamar and her child Moses. And also Nathan and Mary for her support, during her natural life and at their death I give said negroes, and Tamar’s increase, to be equally divided between the heirs lawfully begotten of her body forever.

Item: I give and bequeath to my son Frederick Foy, the following negroes Viz: Dave, George, Sal, Lott, and girl Alice and beds and such tools or stocks of cattle, hogs, as in her possession, and I have given her a deed of gift for the lands where my son James Foy now at present resides in this county, his heirs forever.

Item: I give and bequeath to my daughter Betsey Nixon two feather beds and furniture, and two cows and yearlings, one chest, and the following negroes viz: Mimey and her children of the following names,Simon, Sarah and Grace, and also Jack, Lenea, to her and her heirs (lawfully) begotten of their body forever.

After my wife’s decease, my will and desire is that my lands I left to my wife during her natural life, being the lands I purchased of James Hebble and John Lester to my son Morris and his heirs and assigns forever, the residue not mentioned in my will to pay debts.

Lastly I constitute, make and appoint my sons Frederick Foy and Joshua Foy my whole and sole Executors to this my last Will and Testament, revoking all other wills and testaments by me heretofore made. And I do hereby desire my executors above mentioned to do their duty in full.” 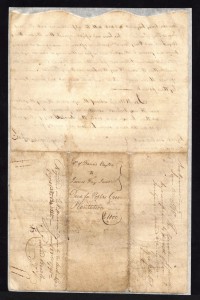 However, it is the legacy of James Foy, Jr. and his wife, Henrietta Rhodes Foy, and their household of bequeathed and purchased enslaved men, women and children that Poplar Grove still stands today.