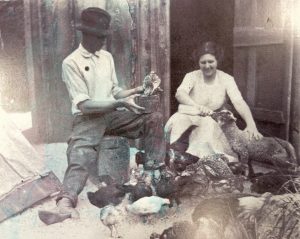 The Stables at Poplar Grove is home to a variety of over 70 animals, reflective of 19th-century farming, including sheep, goats, pigs, hens, roosters, ducks, horses, and ponies.  Centered around education, we provide sanctuary for rescued, donated, abandoned, and neglected equine and farm animals. The Stables was established to create a platform for our community, providing an opportunity for the public to view and interact with the animals typical of a working farm. 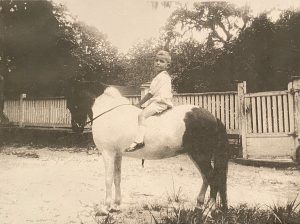 Jersey cows once roamed the acreage surrounding the Manor House at Poplar Grove, and chickens and pigs populated the back yard behind the kitchen shed and herb cellar. The wool from sheep as well as fur from other animals, such as rabbits, was used to create fabrics for necessities like clothes and blankets. Weaving Exhibit.  Hens produced eggs that were a staple to the large Foy family household and its tenant farming families. 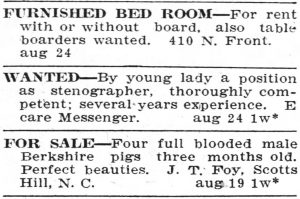 Berkshire pigs (see newspaper clipping on left) were a major source of income for the Foys, and late in the Civil War, Mary Ann Simmons Foy petitioned Jefferson Davis to exempt her second son, 18-year-old Joseph Thompson Foy, from serving in exchange for feeding his Confederate troops with pork. After harvest, the pigs were turned loose on the peanut fields to turn over the soil and fatten themselves on the dropped “goobers,” in time for holiday celebrations such as Thanksgiving and Christmas, but most especially for a large family barbecue on New Year’s Day.

The eggs of free-roaming hens and ducks are available at the seasonal Farmers’ Market on Wednesdays (April – October) and in the Manor House Gift Shop.